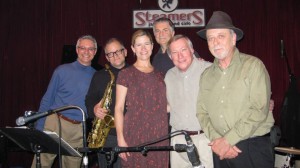 In 2005, CalJAS, in conjunction with Galli’s Piano & Jazz in Rancho Cucamonga, instituted a Wednesday night jazz series in order to bring name jazz artists to the Inland Empire on a regular basis. The series ran from October 2005 until June 2009.

CalJAS was honored to assist Claremont’s Hip Kitty jazz club during their initial opening by introducing some of our regular performers to Claremont audiences.

During 2007 and 2008 CalJAS assisted ChrisAly Jazz in introducing JAZZ AT THE AMBASSADOR, and JAZZ AT THE HIGH DESERT CENTER FOR THE ARTS in Victorville.

In 2009, CalJAS began a successful collaboration with the esteemed STEAMERS JAZZ CLUB AND CAFE, a relationship that continues in 2015.